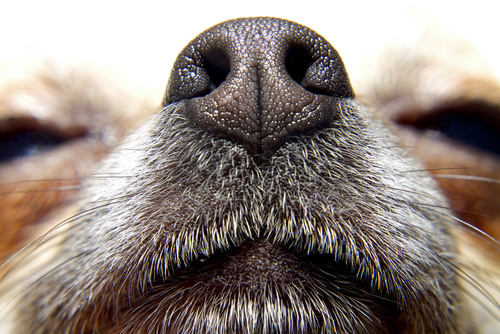 Medical diagnostic tests that test the human breath are becoming increasingly more effective and accurate. Recently, researchers have developed a breath test that can diagnose Cystic Fibrosis, GERD, and IBD. Similarly, there is also a newly-created breath test for detecting lung cancer. While these news tests diagnose diseases of the lung, a new breath test involving dogs may allow for the early, accurate diagnosis of breast cancer.

According to numerous reports out of the UK, a breast cancer clinic in Buckinghamshire is working with a cutting-edge organization known as Medical Detection Dogs in preparing to conduct a study to see if their specially trained dogs can literally sniff out trace evidence of breast cancer in patients.

This isn’t the first time that dogs from the organization have been used to detect cancer. According to a report in the Telegraph, dogs have been previously utilized to sniff urine samples to diagnose prostate cancer, achieving a 93% accuracy rate and having the findings published in the British Medical Journal. Similar findings were reported in bladder cancer as well in the BMJ, entitled, “Olfactory detection of human bladder cancer by dogs: proof of principle study.” However, researchers admit that this new study is by far the most audacious challenge yet for the cancer-sniffing canines, as the evidence of breast cancer in the breath is a considerably more challenging diagnostic marker than in previous studies.

The new study will employ six trained dogs to sniff breath samples from 1,500 women. Because of dogs’ keen sense of smell — they can detect the presence of compounds as scarce as one part per trillion in the air — they should be able to detect traces of breast cancer cell by-products in the breath.

To date, mammograms remain the gold standard for detecting breast cancer in women. However, given some of the risks associated with the radiation that women are exposed to during the procedure, the prospect of developing a safer, less invasive diagnostic for the disease is of interest to researchers and clinicians alike.